The Stepping Stones of My Career

I was born in the middle of the Great Depression in New Haven, CT on September 14, 1933. I was never aware of those trying times. I simply thought that this is how life is and always was. I do remember how my father had many different jobs to make ends meet: fixing clocks and watches, selling eggs, picking vegetables for various farmers, etc. My mother sought employment in factories while I was sent to nursery school. My family moved often in those early days. From Pearl St. to Assumption St., New Haven and twice to Hamden, CT where we lived with my maternal grandparents. Eventually, we returned to New Haven where my family remained until I graduated from college. 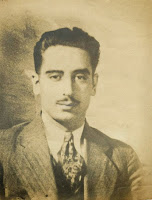 I must pay special tribute to my father (pictured on left) who was so willing to sacrifice for the future of his children. I aspired to go to college but felt the obligation to work and help my family after graduating from high school. Surprisingly, much to my mother's chagrin, my father wanted me to go to a four-year college. I was dumbfounded and delighted. Now, I can follow in the footsteps of my older brother, Richard who was attending Yale on a four-year scholarship.
I graduated from UConn with honors in 1956. That same year I married Annette Esposito. After a one-year stint in industry, I applied and was accepted into a teacher training program for college graduates sponsored by the State Department of Education. I completed this successfully and went on to teach science and math in Wallingford. During this period, I worked as a Research Associate in various psychology-related projects at Yale. Five years later, after receiving my MA in psychology at SCSU, I became Guidance Director at Amity Regional Jr. High School in 1963. My son, Randy was born one year later. While at Amity, I was selected to participate in a Federally funded program to investigate potential computer applications to public education. Four years later I accepted the position of Director of Special Education for Shelton Public Schools. My final position in Public Schools was that of School Psychologist in Fairfield.
I continued my education while employed in public schools by enrolling part-time in a Ph.D. program in Educational Psychology at UConn. It was during this period that I was selected into Phi Kappa Phi, an academic honor society at UConn. Unfortunately, Annette who was in remission from cancer became ill with acute leukemia. She passed on in less than six months. My son, Randy was only 11 years old. I found it impossible to continue my work at UConn and dropped out of the program.
My interest in computers was intensified with the arrival of micro-computers (PCs) in 1980. I attended a technology program at Wesleyan University in the summer of 1982. Another shift in my career occurred in 1982 when Fairfield split my assignment between school psychologist and computer specialist for their special education program. I wrote a number of programs for this department, including the Spelling Speaker, a program that utilized a speech synthesizer to teach spelling and sight vocabulary. A year later I became Computer Coordinator for the school system.
My work as Computer Coordinator proved to be engrossing and challenging. I soon discovered that many educators did not welcome the arrival of computers. Some were even hostile or did not like the aspect of having to learn a new skill. At the time, the platform of choice was the Apple II. This was the first machine that I and many teachers first learned to use. One of my self-imposed responsibilities was to keep abreast of developments in the technology industry. Much to my dismay, I discovered that the Apple IIe and GS machines had designs that were "terminal". This meant they could not be upgraded and would soon become obsolete. Even more disconcerting was Apple's cloak of secrecy: they continued selling this machine to schools when they were aware that it was already obsolete. The Apple II was known in the industry as Apple's "cash cow." Many of my colleagues refused to listen to my advice to stop purchasing these machines. Fortunately, the high school principal accepted my advice and Fairfield avoided wasting money on a soon to be worthless computer. My attitude toward Apple Corporation was forever changed. I moved to the IBM PC platform which at the time was the cutting edge of technology. Many educators continued to protest my advocacy of the PC over Apple products. History proves that I was correct: The Apple II was discontinued and the PC became the dominant machine in business and industry.
Another problem with Apple Corp. is it keeps its hardware proprietary. That is, only Apple can make the Macintosh line, whereas anyone can manufacture a PC: simply buy and assemble the parts and install operating system software, usually Windows. Whenever school systems were ready to make a large purchase the bidding process was voided if they specified Apple machines. It was not uncommon for Apple to "loose" a bid to other manufacturers and still get the contract. PCs were as powerful as Macs and substantially less expensive. This is true even today. Apple is one of the richest companies in the US  - all due to their restrictive policies, shrewd marketing, and high-profit margins.
I was removed from my position of Computer Coordinator and became half-time computer specialist and half-time psychologist. My duty as computer specialist was to train elementary school teachers how to use the Macintosh. I did this for three years and retired from public school education at the age of 62. However, I did not retire from computers. Earlier I had started my own computer business: Galaxy Computer Services. I sold and installed PCs and provided training to individuals and business establishments. I left the business when the profit margin on PCs was so low as to make it unprofitable. Ultimately, I taught computer applications at Briarwood College until I finally retired.in 2007.
Posted by Ron Abate at 1:46 PM 1 comment: